Over the next few days, I'll publish my review of the new MacBook Pro¹ here in several installments. This is the first one, which looks at battery life.

¹ This is of course the Intel Haswell-powered MacBook Pro "with Retina® Display", but the latter pretty much goes without saying now. Which is a good thing, because I really dislike (mis-)using the word "retina" to indicate a high resolution screen, especially when capitalized. I got middle stock model: 8 GB RAM, 256 GB SDD, 2.4 GHz CPU.

Many of a computer’s features reveal themselves in only a few minutes or even seconds of use. That is not exactly the case for battery life. The amount of time you can work on a battery charge also varies wildly with the type of use. So Apple's claim that this computer can work on battery power for 9 hours was one of the first things I wanted to test. Here are the results of three tests I did.

My first test is the "wait for mail" test. This is the lightest possible workload, so it should provide an upper limit on battery life you can expect. The computer has bluetooth and Wi-Fi on, the screen is set to the lowest non-off brightness, sleep and the screensaver are turned off, and only two applications are open: Mail and Messages. When I went to the System Preferences to turn off sleep, I was a bit confused. Did the Energy Saver pane always look like this? 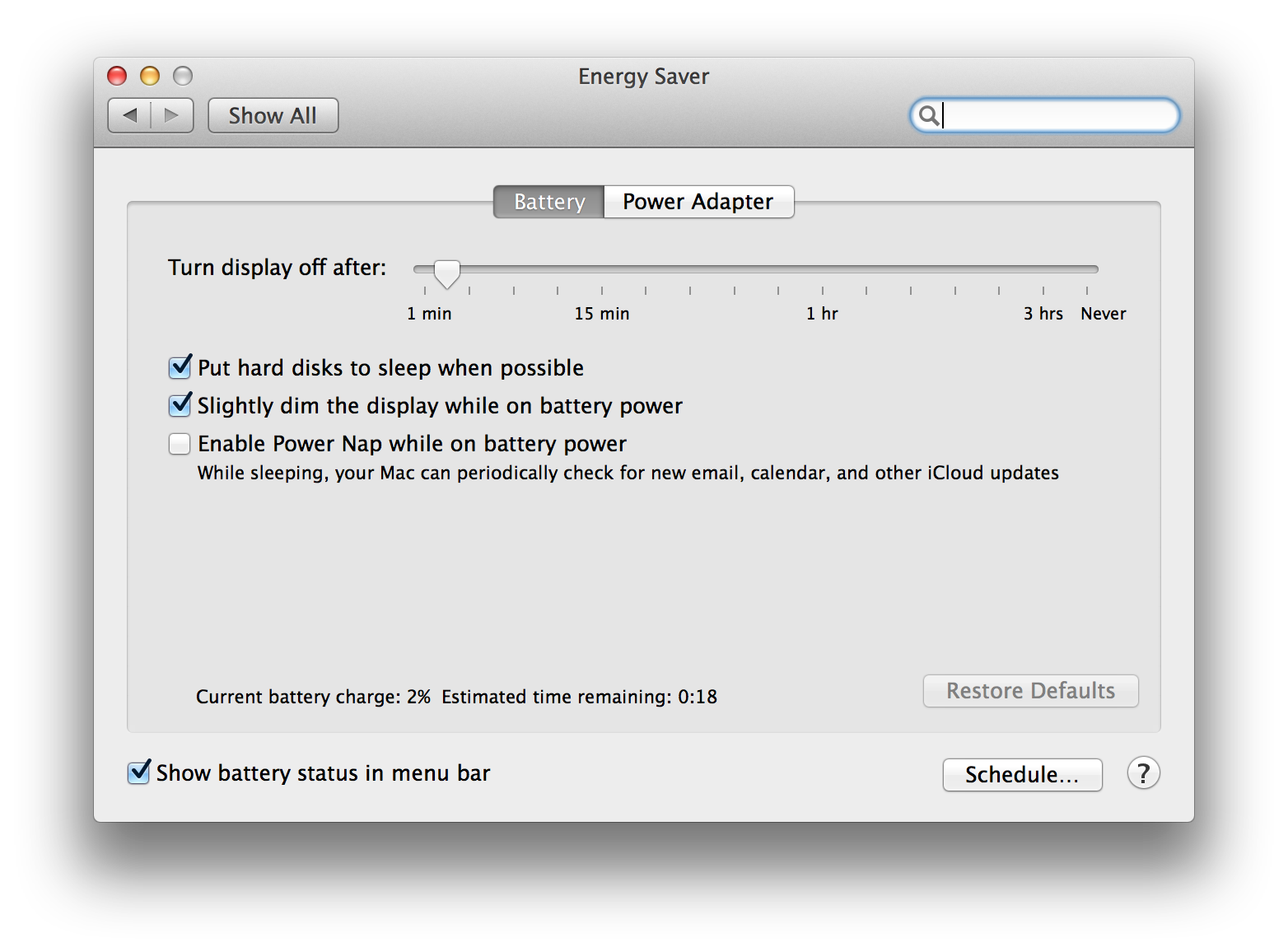 (Turns out that when using the power adapter, you can keep the computer from sleeping when the display sleeps, but there's no setting for how long until the computer sleeps.)

So after removing the sleep light a few years ago, Apple took the next logical step and simply lets the entire computer sleep very soon after the display goes to sleep. Which of course helps you get even more battery life. However, this is not so great when it comes to mail and IM clients and the like that run in the background and monitor what happens over the network. But this can be remedied with tools like Wimoweh, that make sure the computer doesn't sleep when you don't want it to. Or maybe not... I was still able to ping the computer even though the caps lock light on the keyboard had turned off, presumably indicating that the computer had gone to sleep.

In this setup, clicking on the battery icon in the menu bar showed that the system expected to be able to run for 20 hours. I had prepared the test setup before I went to bed. I woke up early 6 hours later, but the battery still showed a 100% charge and 20 hours left. After running for 8 hours, this had dropped to 74% and 14 hours, 45 minutes. I checked every hour from then on, and in each case, the battery had depleted another 4%. After 12 hours, I ended the test with 58% charge left in the battery, because I wanted to actually use my brand new computer for something.

Verdict for the "wait for mail" test: it seems the battery charge percentage wasn't calibrated correctly when full. But this computer can easily run 12 hours on the battery if it's not really doing anything, and probably as much as 24 hours.

The next test was watching video. I tried a few different types of video and looked at the battery percentage to evaluate the battery's performance to avoid having to spend a week running battery tests. For these tests I set the screen to half brightness and turned off Wi-Fi. (I think I forgot to turn off bluetooth.) Headphones were connected for the audio at a quarter volume.

First I wanted to see how this machine handles viewing DVDs. But... it doesn't have a DVD drive! So I hooked up Apple's external USB Superdrive. At first it seemed that this wasn't the best possible idea, as during the first few minutes of watching the DVD the drive was very noisy. But after that, it spun down and only spun up in a more modest fashion momentarily from time to time. Playing back a DVD for 1.5 hours used up 16% battery charge. So it should be possible to watch DVDs for a little over 6 hours.

But obviously this isn't a very realistic test. If you're going to watch a DVD on a computer with only an external optical drive, you'd rip the DVD beforehand and then play the ripped DVD from the internal SSD drive. This is what I did starting at 8% battery capacity left. 45 minutes later, the computer went to sleep. So this means the computer should be able to play back ripped DVDs for more than 9 hours on one battery charge.

Then I played back a movie in 1080p HD resolution in H.264 format. Two hours of this used up 17% battery capacity. So the computer should be able to play back HD video in GPU-accelerated H.264 format for nearly 12 hours on a single battery charge.

Last but not least: how long does the battery last during more typical use? Many professional reviewers have test setups where a script loads a website every 15 seconds or something like that. The good thing is that this makes for a consistent, repeatable test. But it's not real use. What I did is use the computer like I do normally, with two slight tweaks: I made sure I had the computer do something pretty much the entire time, and display sleep was set to "never". I played music most of the time, either using the built-in speakers or streaming over the network to my Apple TV. Most of the time I was writing or reading web pages in Safari, but I also turned on Filevault at some point, so the computer had to encrypt its entire "256" GB SSD.² The computer also slept for 12.5 hours, which used up 3% battery charge. Most of this test was done at night with the screen at low brightness.

When awake, the MacBook Pro used 10 - 12 % battery per hour. Ultimately, it went to sleep after 9 hours and 42 minutes of use. So Apple's battery life claim of 9 hours is completely justified. Obviously, you're not going to get this kind of battery life doing things like video encoding. On the other hand, you can make the battery last longer by not playing music and otherwise minimizing background tasks.

At IETF meetings, there are always power strips strewn throughout the meeting rooms. A decade ago, I'd always connect my laptop to power whenever I could, and run a few hours on the battery otherwise. More recently, I wouldn't bother to connect the power adapter during the morning session, but I'd have to do so during the afternoon sessions at some point. I think with this computer I could easily leave the power adapter in my hotel room and run on the battery the entire day. I typically don't stay in the conference hotel, so this would be taking a slight risk. But with more than a thousand Internet engineers around you can probably bum fifteen minutes of charging in a pinch...

Speaking of charging: the included 60 Watt power supply charges the battery at about 1% per minute, but this slows down after reaching 80%, so charging from dead to full takes two hours. In other words, much the same as charging an iPhone.

Conclusion: the battery life is everything Apple promises and then some. You really don't need to forego the high resolution screen and get a MacBook Air if you want extremely good battery life.