Earlier this week I got myself a Nikon F65 camera. The F65 is a single lens reflex 35 mm film camera that Nikon sold from 2001 to around 2005. You can get these second hand for next to nothing these days; I even saw one at the not-very-cheap photo store for € 35. Sure, you have to pay for batteries and film, so using one of these costs some money, but owning one is very cheap. The F65 was never a high end camera, though: the construction is all plastic, and the viewfinder is not great. The plastic construction is not a problem, however, this is what makes the F65 so much lighter than any Nikon DSLR at a hair over 400 grams.

This camera does everything you need and very little that you don't. Although the design is more than a decade old, it still has all the important features you'll find on modern cameras: matrix metering, an auto mode as well as the P/A/S/M modes and even five scene modes. It has a built-in pop-up flash. Just set the mode dial to auto or P (if you don't want any flash) and give it to anyone and they'll shoot great pictures with it. The F65 is much less intimidating than a hulking DSLR with three times the buttons.

The F65 lacks many of the complex settings found on a camera like the D7100, partly because many of them only apply to digital and partly because the F65 is a simpler camera. But that's fine, I'm not going to experiment with advanced techniques on film. That's where digital shines with its immediate feedback.

Even film loading is simple: just put in the film cartridge and pull the film towards the winding spool. Close the back, and the camera takes it from there. When the roll full, it rewinds automatically.

The F65 shares the above with its little sibling, the F55. However, the F65 is a much, much better deal. Unlike the F55, the F65 supports the ML-L3 infrared remote that also works with the D7100. More importantly, the F65 works with all of Nikon's autofocus lenses, so you can use your modern AF-S lenses on it. The VR (vibration reduction) even works! (Although I fear for the life of the two rather small and non-rechargeable CR2 batteries that power the F65.)

Now I hear you thinking "that's nice, but all my current lenses are DX lenses that aren't compatible with film". Turns out DX lenses, which are made for cameras like the D7100, which have an image sensor that is smaller than the 35 mm film frame, are not entirely unusable on film cameras. When I mounted my 35 mm f/1.8 DX lens on the F65, the viewfinder image didn't show any dark corners. However, the viewfinder only shows 89% of the image that ends up on film, and the result on film looks like this: 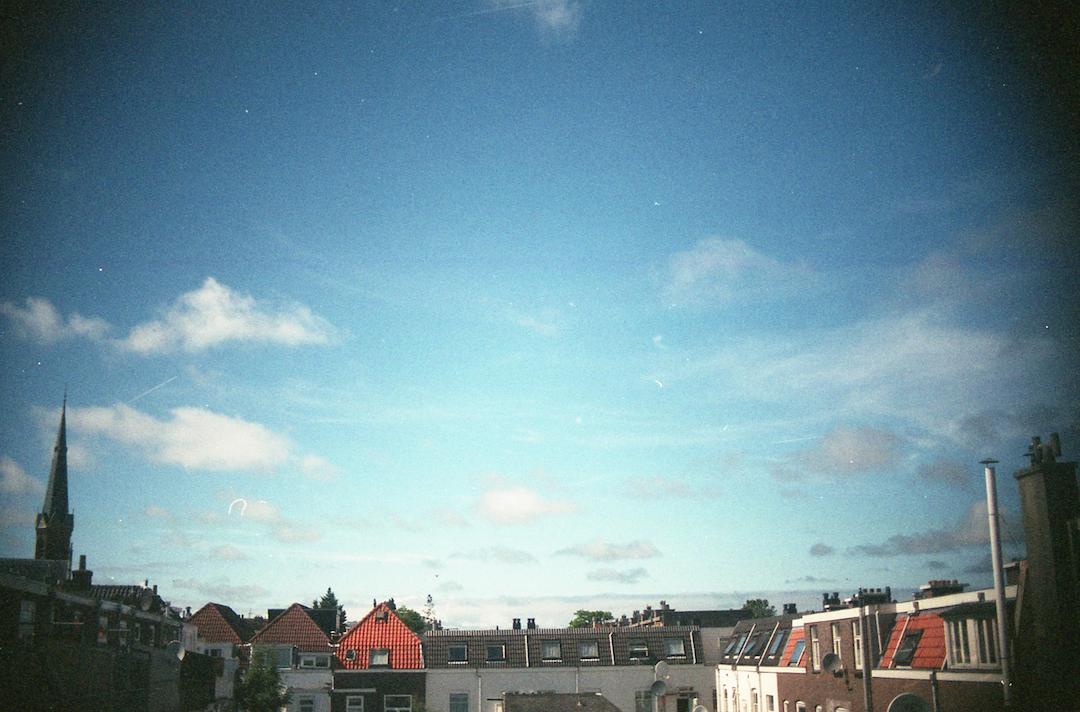 So not usable, I'd say. (At least, if you want to print the old fashioned way. If you scan the negatives, you can always crop away the dark corners.) Next, I tried the 18-55 VR II lens. The image on the left is zoomed to 18 mm, the middle one 24 mm, where once again things looked good through the viewfinder, and the image on the left was taken zoomed to 35 mm.

The 24 mm image stil has dark corners, but at 35 mm everything's fine. So this lens is actually completely usable at 35 mm—probably even a bit wider, like 28 or 30 mm.

This is a fantastic result: 14 mm on film is actually slightly wider than 10 mm on DX. So this lens is extremely useful on film!

I got my F65 with an AF 28-80 f/3.5-5.6D lens. This is dinkiest all-plastic Nikon lens I've ever seen. The thing I like is that it's an AF lens with an aperture ring, so it's compatible with even older Nikon cameras. If you don't care about that, get it with the AF 28-80 f/3.5-5.6G. which is also all-plastic, but much more solid and a bit smaller and lighter. Note that the F65 can't use its light meter with non-CPU lenses from the manual focus era.

Verdict: if you have a Nikon DSLR and some lenses, even if they're DX lenses, and you have any interest in shooting film, get an F65. It's a great camera and it can be found for next to nothing. And now you have second body for those times where you can't change lenses easily, or you can hand the F65 to someone you don't trust with your expensive DSLR.