I'll spare you the details, but I recently needed to up my game in the toothbrushing department. I've been brushing my teeth with an entry-level Oral-B electric toothbrush for almost a decade, but I thought I could do better with a more advanced one that provides a warning when you brush too hard. (This can damage your gums.) Turns out there's now a model that has bluetooth. After all, everything is better with bluetooth:

However, at first I decided against getting the model with bluetooth, as it doesn't really add much functionality: the Oral-B app will show you a timer during brushing, and keep track of how often and how long you've brushed. That's basically it. And the app can also do this by listening for the sound of the toothbrush! Also, the models I had my eye on come with a little wireless display that provides the same feedback as the app (not the statistics, though). But I got a rebate that made the Oral-B PRO 6000 the same price as the Oral-B Triumph SmartGuide 5000, so why not get the 6000 with bluetooth?

Out of the box, the toothbrush' battery is empty. It takes about 24 hours to completely charge, but I was able to brush my teeth after about half an hour. I needed to set the clock on the SmartGuide, but there was no need to do anything to pair it. The seven brush heads are all different, I assume they're meant as a sampling of what's available. I'm using the "sensitive" one, which has softer hairs and is easier on the gums. I wish they'd put the name/type of the brush head on the packaging, though! The documentation for these on the various Oral-B websites and the paper manual is fairly incomplete, but the video on the DVD shows them all. I've also seen displays in stores that will help you buy the right ones. Note that the DVD is smaller than usual and thus won't fit in most computer DVD drives.

The travel case is at least twice as big as it needs to be. But I guess if I want to travel with my electric toothbrush, I'll have to use it or risk the toothbrush starting to brush the rest of my luggage when the on/off button gets pressed inadvertently. I usually just take a regular toothbrush when I travel, but it's hard to go back when you're used to electric brushing. It really gets your teeth much cleaner. 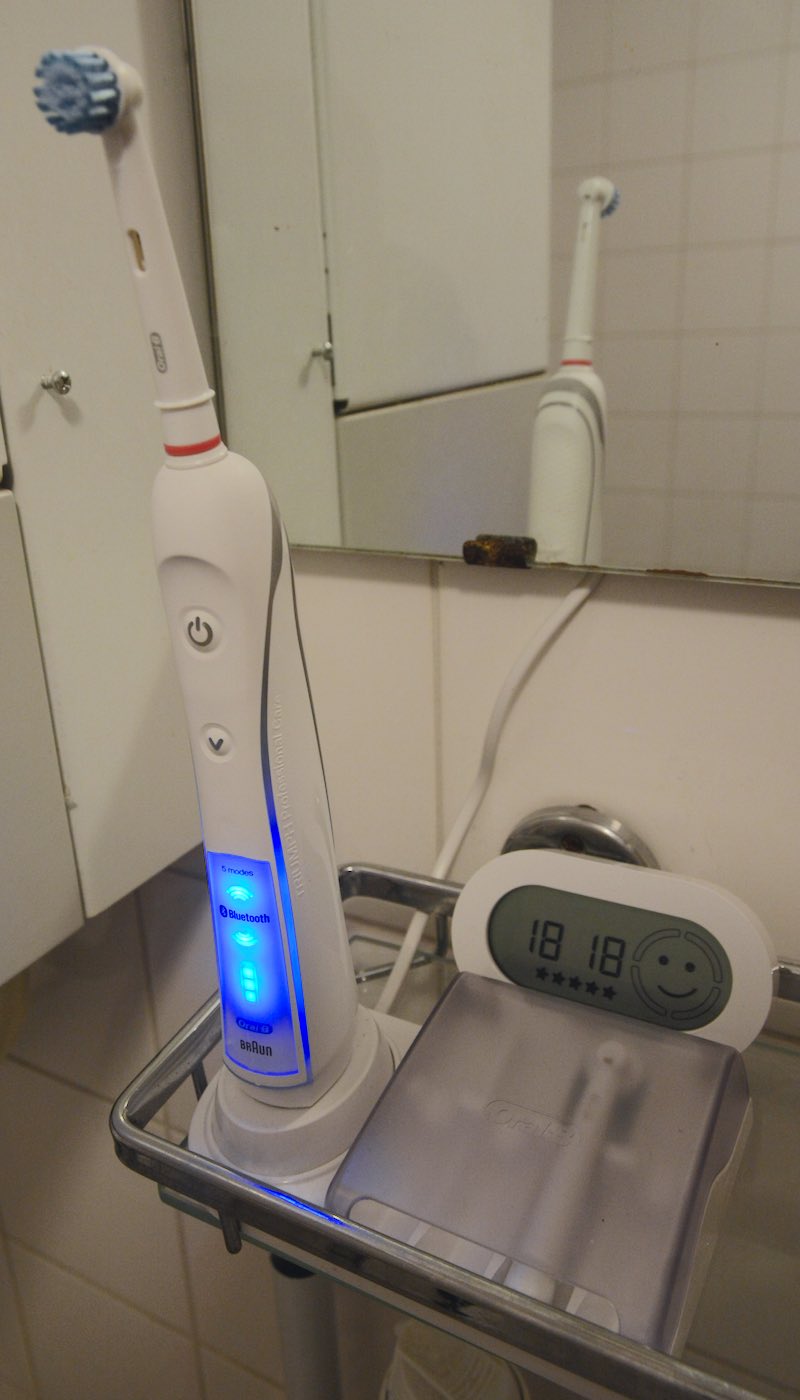 I'm not sure which model I used before (there's no model number on the device), but the old one didn't have any lights. So you never knew when you needed to charge it. The PRO 6000 is much better in this regard: it has three (blue) LEDs that indicate the battery charge, which cycle during charging. There's also another blue light that comes on to indicate bluetooth is active. When brushing, every 30 seconds, a green light will flash and the motor will pause for a moment to indicate that it's time to move on to another quadrant of your mouth. And finally, there's the light that made me get this new toothbrush: a red one that comes on when you press the toothbrush against your teeth too hard. At first I thought this didn't work, but it turns out the warning light only comes on when you press the brush really, really, really hard. Much harder than I ever would. So buying this new toothbrush for this feature was a waste of money.

So what about the bluetooth?

If you want feedback during brushing, make sure the app is open and on the timer screen. Then, simply start brushing and you get a counter that counts to two minutes, switching to different quadrants every 30 seconds. Same as the SmartGuide, which comes on automatically when you start brushing. (When idle, it shows the time.) As such, live feedback on your phone during brushing is not particularly useful. Even the SmartGuide is only somewhat useful. (And remember, if you have a non-bluetooth toothbrush, you can still use the app by using the microphone to detect when you start and stop brushing.) 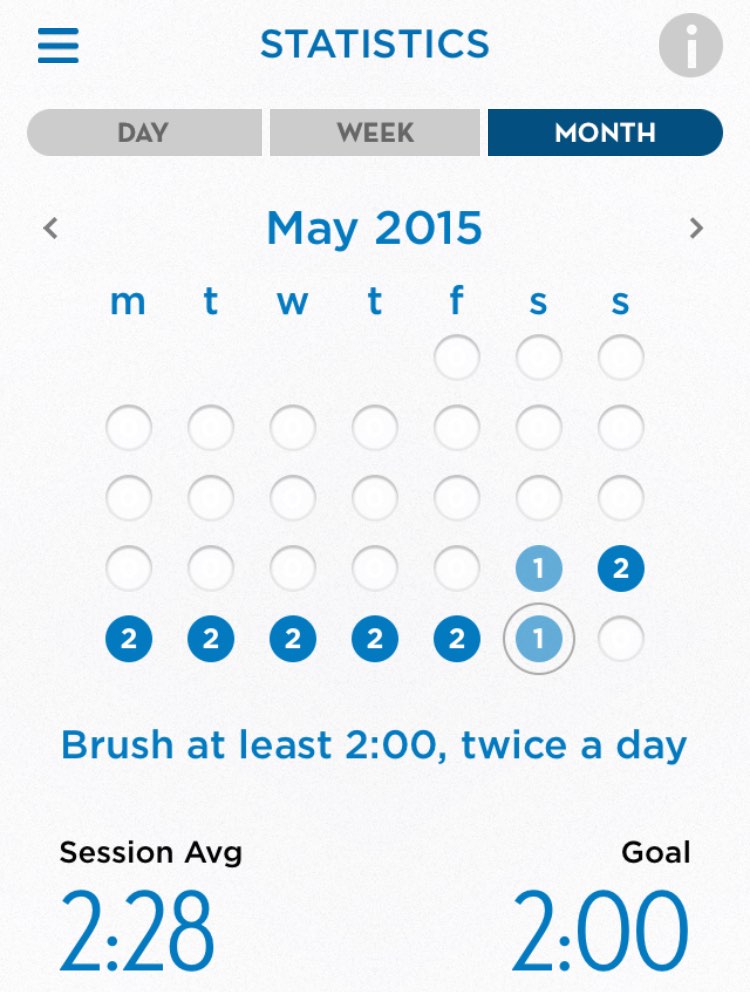 However, one thing that is nice about the app is that it keeps stats on how long and how often you brush. At first I thought this wasn't all that useful, as I always brush my teeth before bed. But I'm actually not that good with brushing during the day. Studies have shown that you should brush twice a day—there's no benefit to doing it more often. Having the app keep track of this for me to keep me honest could be helpful in the long run.

You can share an electric toothbrush with family members by giving everyone their own brush head, which let you attach a colored ring to keep them apart. The container that sits next to the charger holds four brush heads, and attaching/removing them is easy enough. However, the app can't tell the different users apart, so the stats won't be very meaningful when the toothbrush is shared.

I like Oral-B electric toothbrushes. I've never used any other kind, so I can't compare. But the Oral-Bs are all good—I'm not going back to brushing manually any time soon. The PRO 6000 is better than the cheap ones, mostly because of the battery level LEDs. The hardware also looks a bit more solid. The other LEDs, the SmartGuide and the bluetooth are nice, too, but not a game changer. So save your money unless you really want those brushing statistics. Until the toothbrush becomes smarter and gains more sensors so it can tell you more about how well you brushed which teeth, I'm afraid bluetooth doesn't really make brushing your teeth all that much better.