The iPhone 6 as a camera 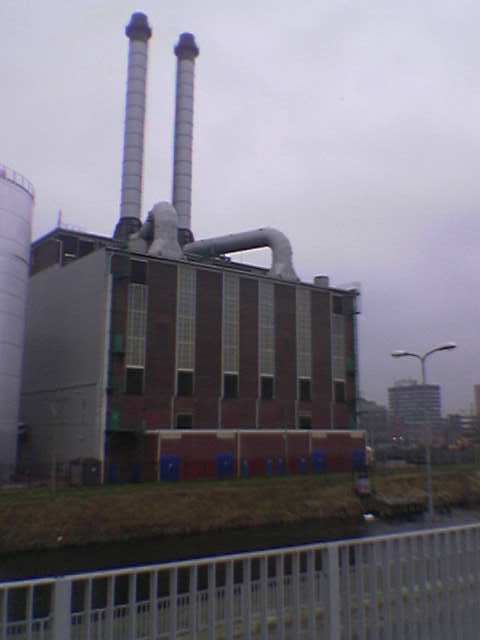 The iPhone 6 takes a much nicer picture of the same subject, and not just because the light was better that day: 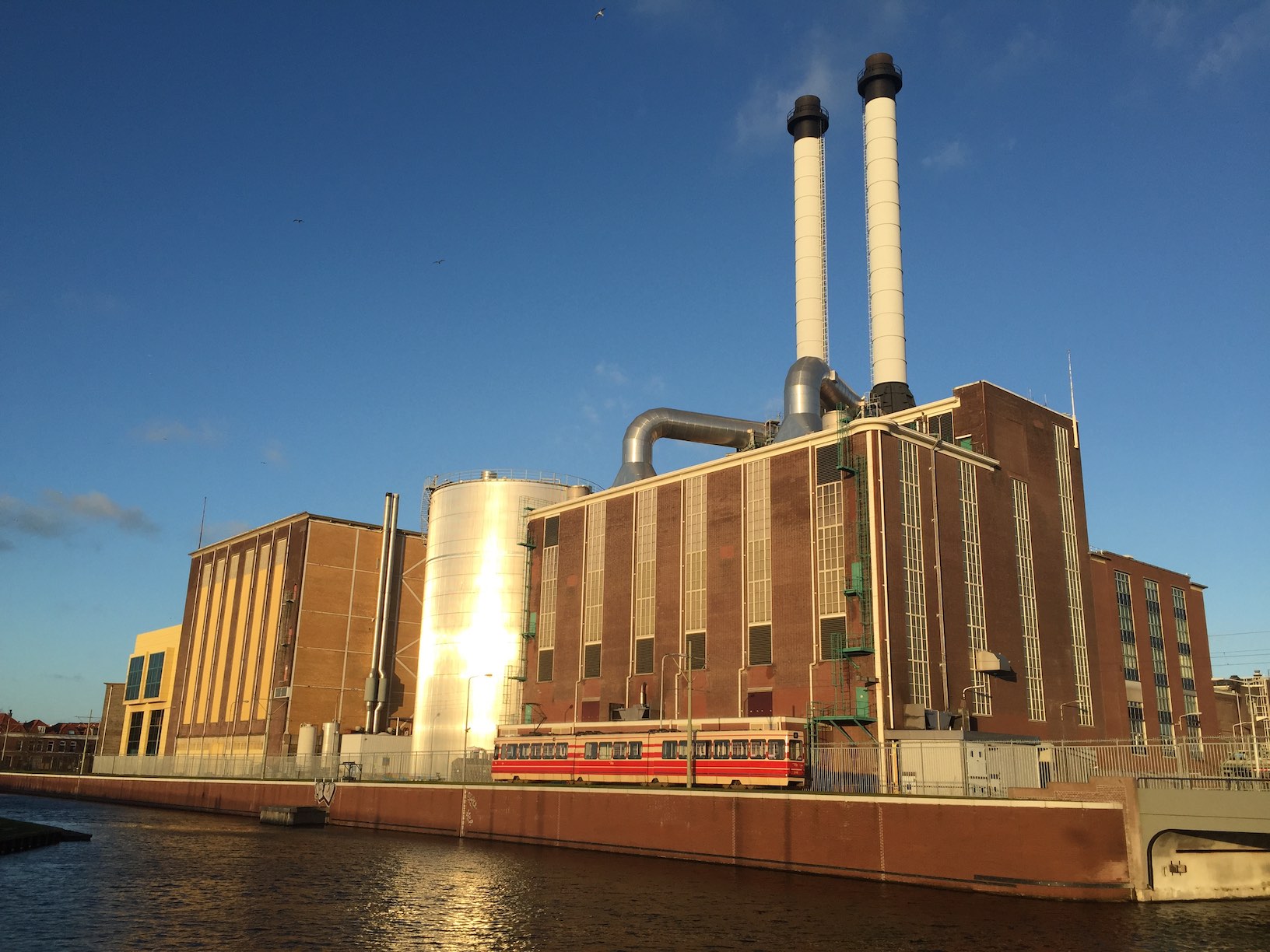 Here's another one of my favorite subjects, the city hall building. First, with the iPhone 4 at 5 megapixels: 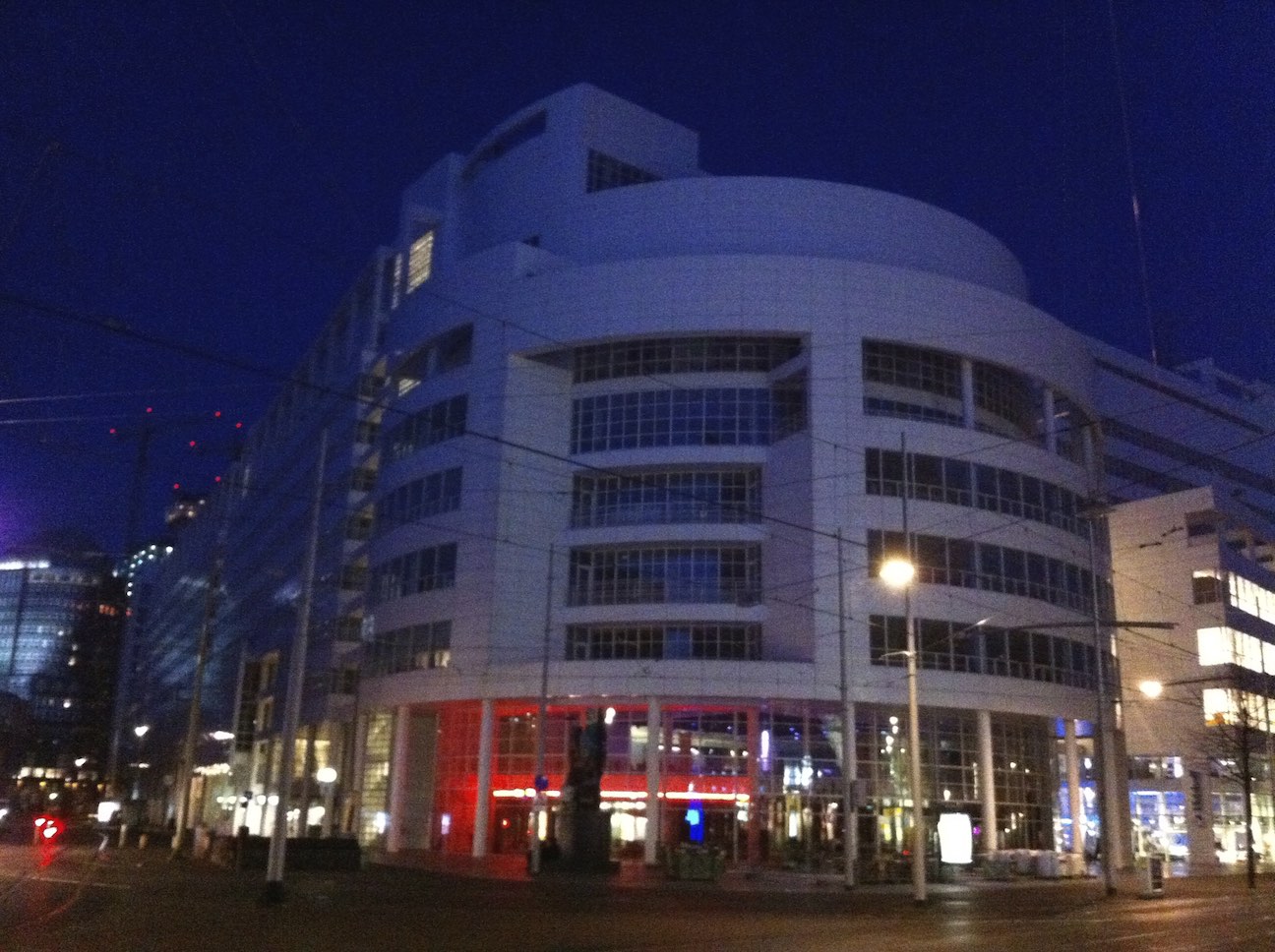 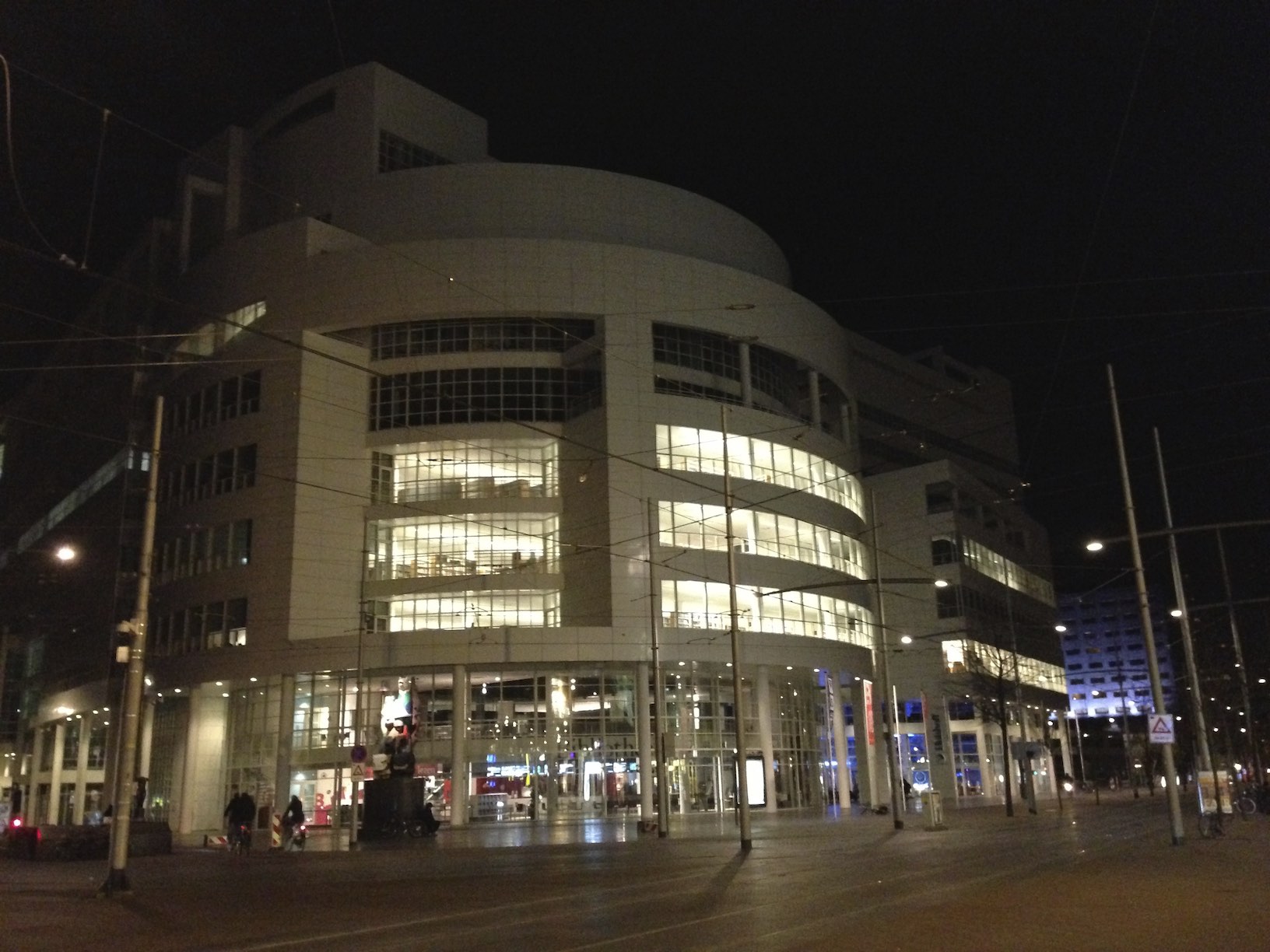 And the iPhone 6, also 8 megapixels: 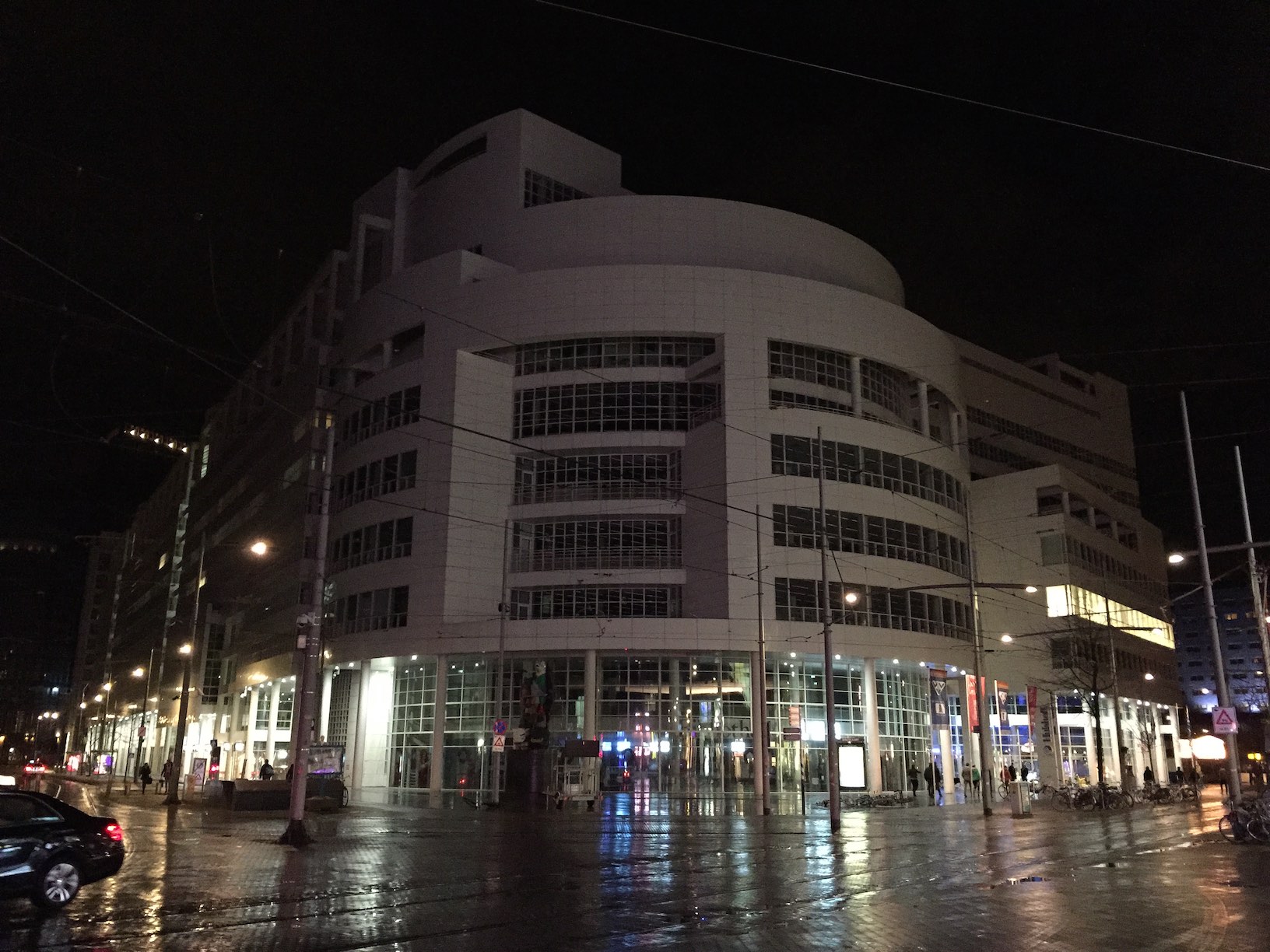 The iPhone 4's camera is obviously not up to the task in such low light. Although the iPhone 5 and 6 both have an 8 megapixel camera, there's still a substantial difference when we zoom in to 100% magnification:

This is a photo of the inside of the city hall building taken with the iPhone 6: 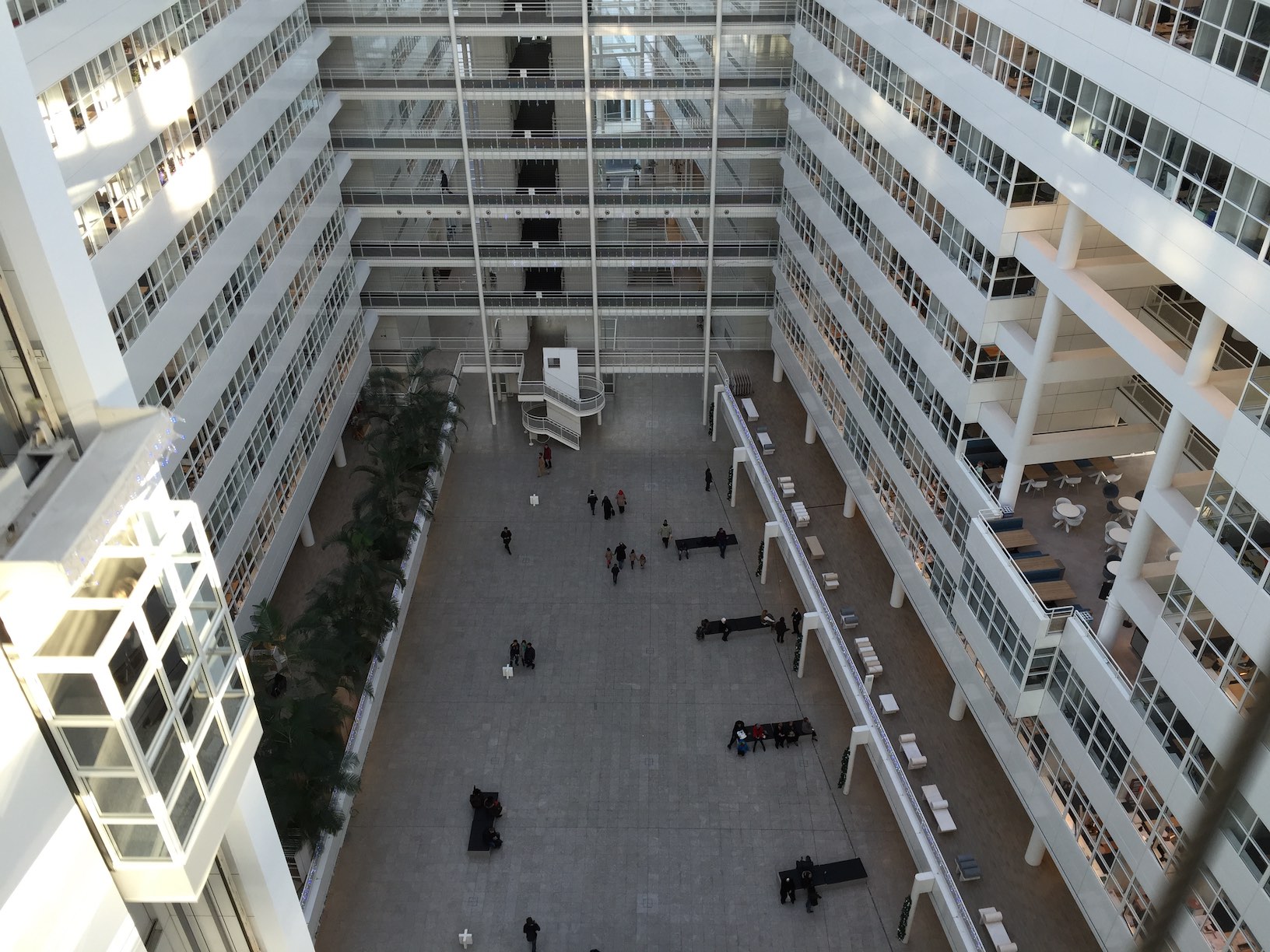 And the same photo taken with a Nikon D7100: 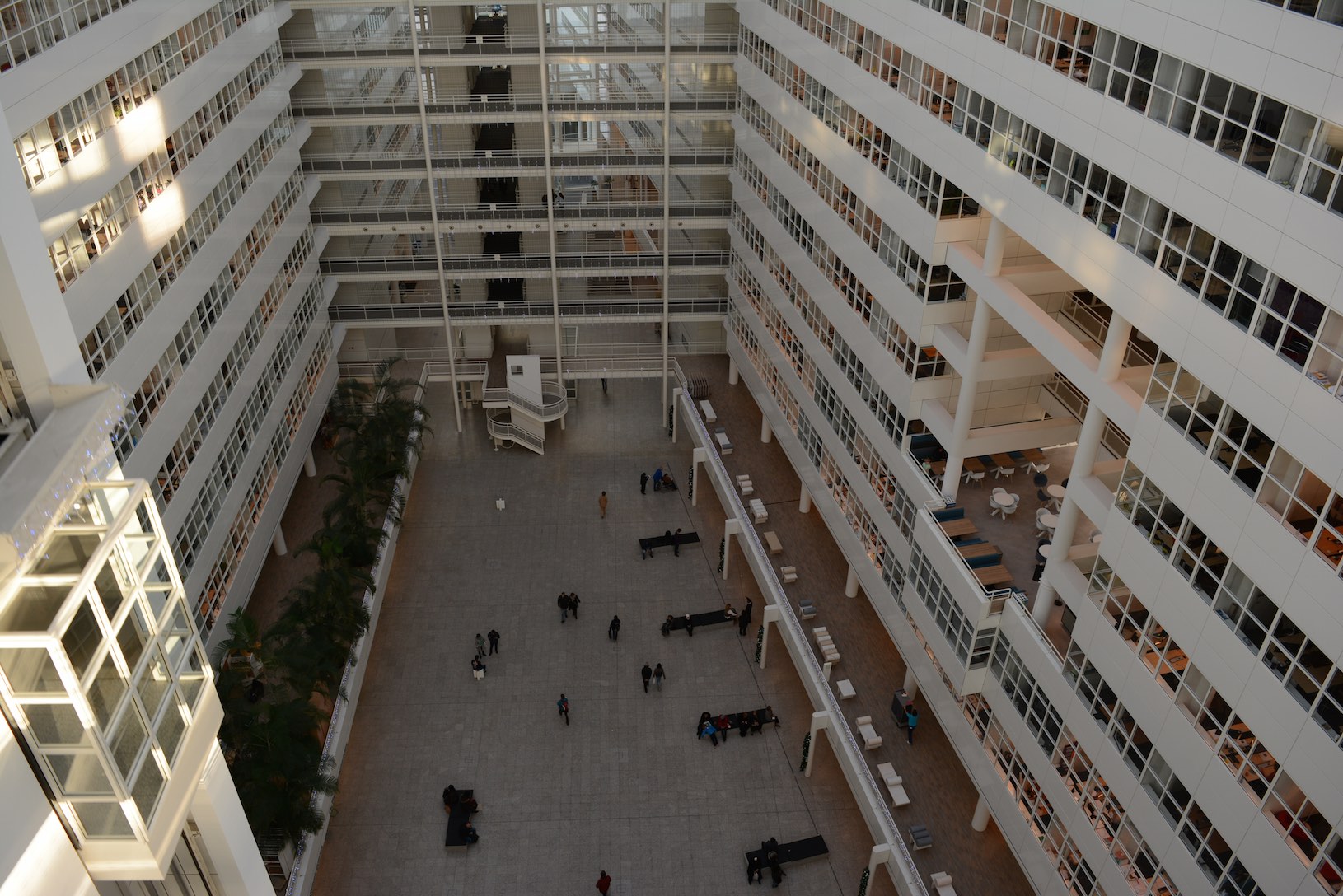 These are (more than) 100% crops of an overexposed part of the photo. On the left is the Nikon D7100 version at 13.5 megapixels JPEG straight out of the camera, then the iPhone 6 version and on the right the D7100 raw version (without corrections for lens issues) at 24 megapixels, with the brightness and color temperature adjusted to match the iPhone version.

As you can see, the iPhone 6 photos show less detail in the shadows and highlights, aren't quite as sharp and have more noise than photos taken with a DSLR. But you have to look pretty hard to notice. So the iPhone 6 camera can deliver very nice photos. However, it has three big limitations compared to a "real" camera:

Non-zoom lenses on SLRs may have an aperture of something like f/2 or f/2.8 while zoom lenses can start anywhere between f/2.8 and f/5.6. However, lens opening can be adjusted to an aperture of f/16 or even smaller. This lets less light in, so it's possible to take pictures even in very bright light. Also, a small aperture provides a large depth of field: both things close to the camera and far from the camera can be in focus. Obviously this is useful when photographing a scene with objects at various differences. But the opposite is also useful: a large aperture provides shallow depth of field, so you can focus on one subject and everything in front or behind that subject will be blurry, so they eye is automatically drawn to the object that's in focus.

However, the iPhone 6 has its 8 megapixels crammed into a tiny image sensor that's less than 5 by 3 mm. If my Nikon D7100 had the same size pixels, its 23.5 x 15.6 mm sensor would have 163 megapixels. (It has 24.) The small sensor and pixels have two effects. First, they require a large aperture because otherwise, diffraction will limit the sharpness of the image. Second, the small sensor increases the depth of field. So there's no need to close down the aperture to increase depth of field—and no opening up the aperture to have a shallow depth of field. So having a fixed aperture is appropriate for a phone camera, although this means excessive brightness has to be dealt with in a different way.

Which brings us to the shutter. Back in the film days, a shutter was required to keep the film in the dark until it was time to take a photo. Almost all cameras still have mechanical shutters today, but it's possible to get pretty much the same result with an electronic shutter. Rather than keep the image sensor in the dark, it's cleared electronically. Then it's exposed to light for an appropriate amount of time, and the image is read from the sensor. So the exposure time is the time between when the sensor is cleared and when it's read. Because all of this happens electronically, this can happen extremely fast. The fastest shutter speed I've seen so far on the iPhone 6 is 1/13333, while the D7100 tops out at 1/4000. 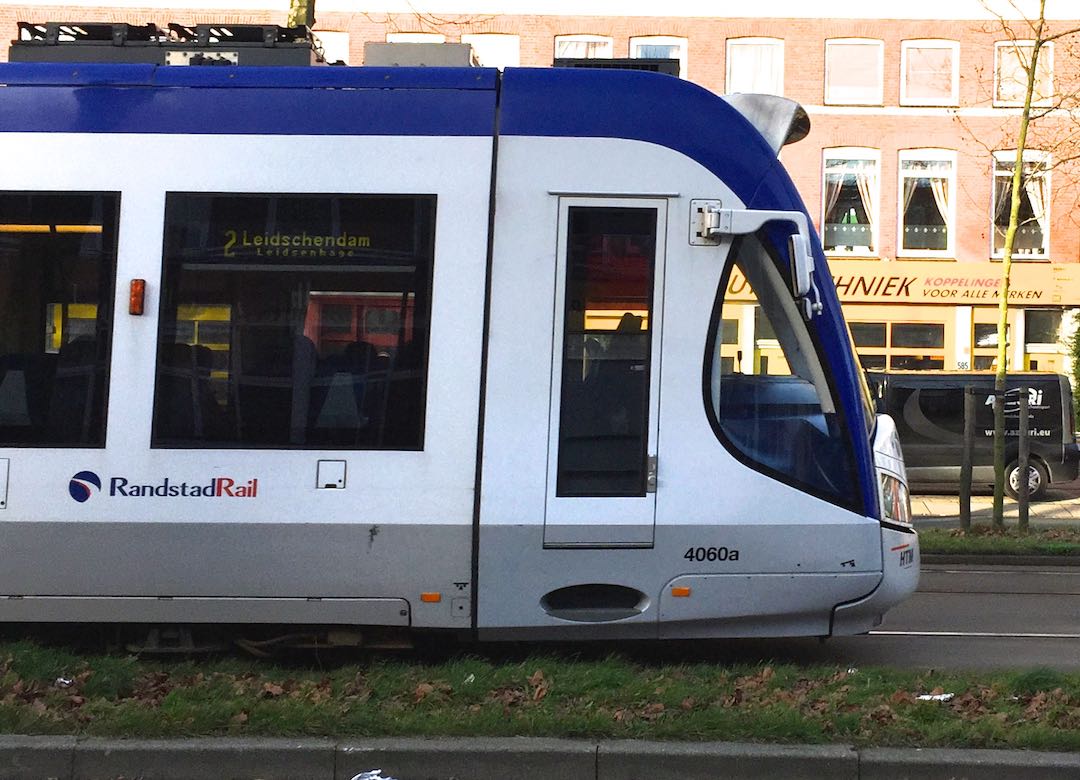 If you look at the door, you'll see that the vertical lines are slightly slanted. This happens because the tram moved while I took the photo. I then took a photo of the next tram holding the iPhone upside down, so the angle is reversed: 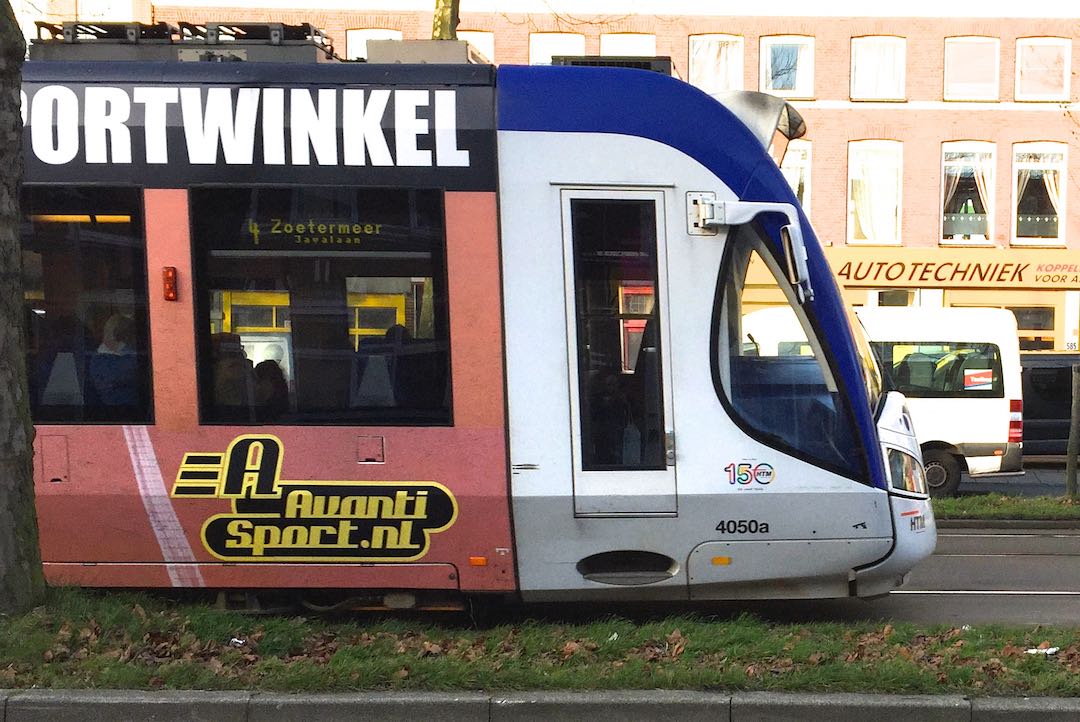 When shooting video, the electronic rolling shutter results in the "jello" effect.

In low light, the sensitivity can go up to ISO 1600, and the shutter time can get as long as 1/15. In order to get a good shot with such a long shutter time, you need to keep the phone really still. What helps here is touch the on-screen shutter button for a second or so. This enables the camera's burst mode, where it takes 10 photos per second. The chances of one in the middle of a burst being sharp are much bigger than the chances of an individual photo being sharp. A nice touch is that you get to select which photo out of a burst you want to keep without having to manually delete all the others.

The wide angle lens on the iPhone 6 is a mixed blessing. It's now wide enough to capture most architecture and landscape shots. It's probably a bit wider than it needs to be for taking photos of people at short distances, but it's fine for that. However, when you do need to zoom in, you really need to zoom in because the lens is so wide. Yes, there's digital zoom, but even if you zoom in by a factor 2, that means that at 58 mm (equivalent) you're still barely past the "normal" focal length of 50 mm, but now you're only using 2 of your 8 megapixels, so the image quality takes a nose dive.

The iPhone 6 now has "focus pixels" that allow it to use phase detection autofocus rather than contrast detection autofocus. Contrast detection moves the lens back and forth until it finds the position where the image is the sharpest. Phase detection on the other hand, lets the camera see in which direction and (approximately) how far the lens should move to achieve focus. This is how SLRs manage to focus so fast. Phase detection autofocus is especially useful for video (where most SLRs can't use it), because it removes the need for "focus hunting". The iPhone 5 was already very good with focus, but with the iPhone 6 it's so fast and accurate that you don't really notice the autofocus process anymore, except in the few cases where it fails. For instance, focussing on fire or water or in very bad light is still problematic.

Conclusion: I'm not going to retire my real cameras just yet, but I do feel like I can leave the house without them without fear for missing too many photographic opportunities. One last tip: you can use an app like Camera+ to set many camera controls manually and to use the iPhone's built-in sensors to see when you're holding the phone level.