My podcast listening workflow: iTunes/Podcasts, Pocket Casts and (not) Overcast

In 2013, I wrote a pretty long story with advice to podcast app developers. Today, someone on Twitter asked me if I ever found a good solution to the "catching up" use case. I guess the short answer would be "no", but did settle on a podcast listening workflow that works fairly well. So let me explain how I listen to podcasts these days. 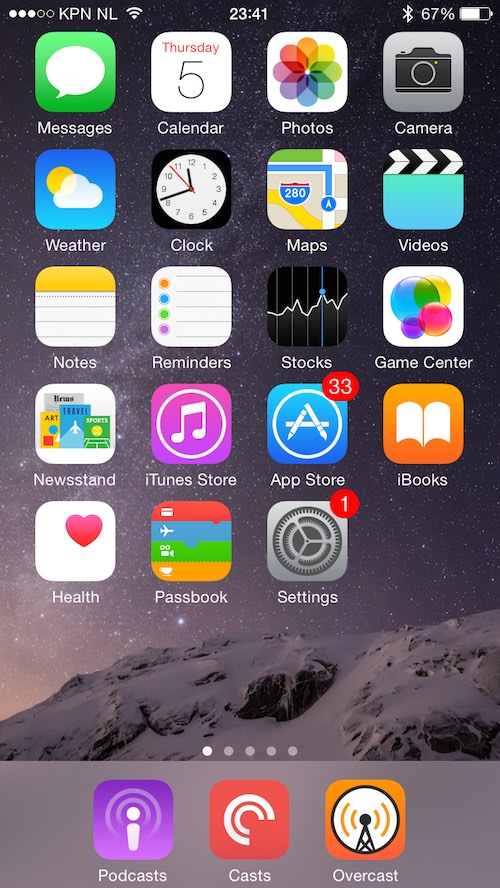 After switching from an iPod to the iPhone, I continued to use Apple's built-in podcast functionality for many years. Of course Apple couldn't resist messing with a good thing, so they released the Podcasts app. For a while, you could still use the Music app to listen to podcasts, but that hasn't been possible for a few years now. A few years earlier, Apple had rejected the first third party podcast podcast app, and later changed their minds about that. A few years later, there was a healthy niche of podcasting apps in the store. And then last year Marco Arment released Overcast.

After I reviewed a bunch of podcast apps for Ars Technica three years ago, I settled on Pocket Casts as my main podcast player. However, I never abandoned Apple's Podcasts app, for two reasons.

First, sometimes I can't use my iPhone, and then it's nice to be able to listen to podcasts using my iPod. So for that reason alone I keep a few podcasts around in iTunes on my computer and sync those to my old iPod as well as my iPhone. Second, going through feeds and selecting which episodes to download and which to skip is easier on a computer with a big screen and a keyboard. Also, long lists of back episodes that I accumulate for a rainy day don't get in the way on iTunes and the Podcasts app. However, iTunes keeps getting harder to use, and Podcasts is far from perfect, especially now that it keeps around old episodes for 24 hours. And not being able to use the headphone clicker to skip ahead can be very frustrating.

When Overcast came out, I obviously wanted to try it out. I found the $5 price for the full version a bit steep, and I don't like the whole in-app purchase thing. The Overcast unlock is my one and only in-app purchase. But I decided that I'd be writing about Overcast here on my blog so the $5 would be worth it. And then I didn't write about Overcast and stopped using it, so it wasn't...

The first week, my main problem with Overcast was that many functions were extremely non-obvious to me. I've forgotten which functions were so problematic, but there was definitely a learning curve involved. However, eventually I figured things out and the app became much more usable. I like the smart speed, which speeds up playback by removing pauses. In theory, I also like the idea of normalizing the volume, but in practice I didn't use it. Another thing that's great in theory but doesn't really do it for me in practice is the smart playlist ordering. Yes, there are some podcasts where I immediately want to cue up a new episode, and others where I'm not in a hurry to listen. But in practice I keep changing the order so often that the feature doesn't really help much. Manually adding/removing episodes from a playlist is way too hard.

However, the one thing that made me stop using Overcast is that it always insists on continuing to play—even after you reach the end of your playlist. I find that insanely annoying. Yes, you can make Overcast stop playing at the end of the current episode, but there is no workable way to play a bunch of episodes and then stop.

So I went back to Pocket Casts. I like the look of Pocket Casts better, and in the current version "up next" works very well: when you add episodes, they're put at the end of the "up next" list. You can easily do this with a long press on an episode and then one additional tap. Unfortunately, removing episodes from the up next list is much harder. You'd think that a swipe to the left would do it, but that marks the episode as played, which is pretty much never what I want in the up next list.

To finally answer the question on Twitter: Pocket Cast doesn't handle catching up exactly the way I'd like, but it works. When you subscribe to a podcast, the latest episode shows as new and all older ones as played. When I decide I want to catch up and listen to all old episodes or some old episodes, I just scroll to the bottom of the episode list, tapping "show older episodes" as needed. I then download a few, and listen to those. I have to take care that I go back and download more before I listen to all the ones I downloaded, because having at least one downloaded but unplayed episode allows me to keep track of how far in the feed I got.

Yes, it would be nice if more episodes would be downloaded automatically as I listened to older episodes, but downloading them manually is no big deal. The only annoying part is that the downloaded episodes move to the "new" section at the top of the episode list, so it's not obvious where in the "played" section the oldest unlistened episode resides. A solution would be to mark the whole feed as new, but then all the unlistened episodes would clutter up my "all" list, which also isn't great.

Update: it turns out that the swipe-to-the-left gesture that normally marks podcasts as "old" also marks old ones as new.