A battery breakthrough would explain the Apple car

The latest Apple rumor is that they're working on a car. A rumor that is easily dismissed:

But is it? What would it take for Apple to start making cars?

Cars are a huge market and they're very expensive. That's exactly the type of market Apple needs to enter if it wants to continue growing its already unprecedented profits. However, cars aren't very profitable for the companies that make them today. So Apple needs to bring something unique to the table to allow it to reach the margins it's grown accustomed to.

There are already very nice high-end cars, and there's just not that many people who can afford them; selling a better car for a higher price isn't going to give Apple the numbers that it needs. What Apple needs to do is make a better car cheaper, so it can be sold for a regular price but at an Apple-like margin.

The insides and outsides of a car are determined by its function and the fact that it must push through the air at a relatively high speed. There's not much that Apple can do here. Maybe Apple has come up with some new user (driver?) interface paradigm that will revolutionize driving, but somehow I doubt that.

Maybe an Apple car is going to be self-driving? Not impossible. But Google has been working on that for some time, and they use existing cars. Also, Google's driverless cars are described as "trains running on invisible tracks": they're not very autonomous, but rely on extremely detailed maps. Is Apple confident enough in its mapping abilities to think they can pull this off?

But maybe they just build a better car. Apple isn't going to improve the motors used in electric cars, simply because those are already pretty much perfect: they weigh a fraction of what an internal combustion engine weighs, run at 90% efficiency and they last pretty much forever with little or no maintenance. Most of the other electronic and mechanical parts are small potatoes.

However, there is one thing in an electric car that could be improved: the battery. A better battery that stores more energy for the same size/weight would be a big deal. Or that can be charged faster. Or lasts longer before it has to be replaced. Or is simply cheaper. 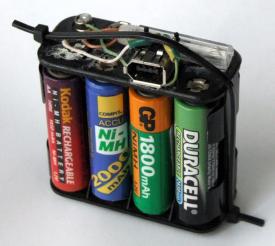 We read about research breakthroughs in battery technology all the time, but we rarely see those translate into real-world improvements. Obviously, Apple has been interested in batteries for a long time. So what if Apple has developed a significantly better battery? That's sure going to help the Apple Watch, and we could all use a bit more battery life in our iPhones.

But if you're looking to monetize a battery technology breakthrough, look no further than the electric car.