Canon PIXMA printer vs Apple's photo lab: it's pretty much a tie

A few years ago, I ordered some prints through iPhoto. I've also used other services to order prints of digital photos in the past, and those always look just as good as "real" photos, as long as the original file is of sufficient quality. But what about my new Canon PIXMA MG7550? How do photos printed using it compare to photos printed by a lab? See for yourself: 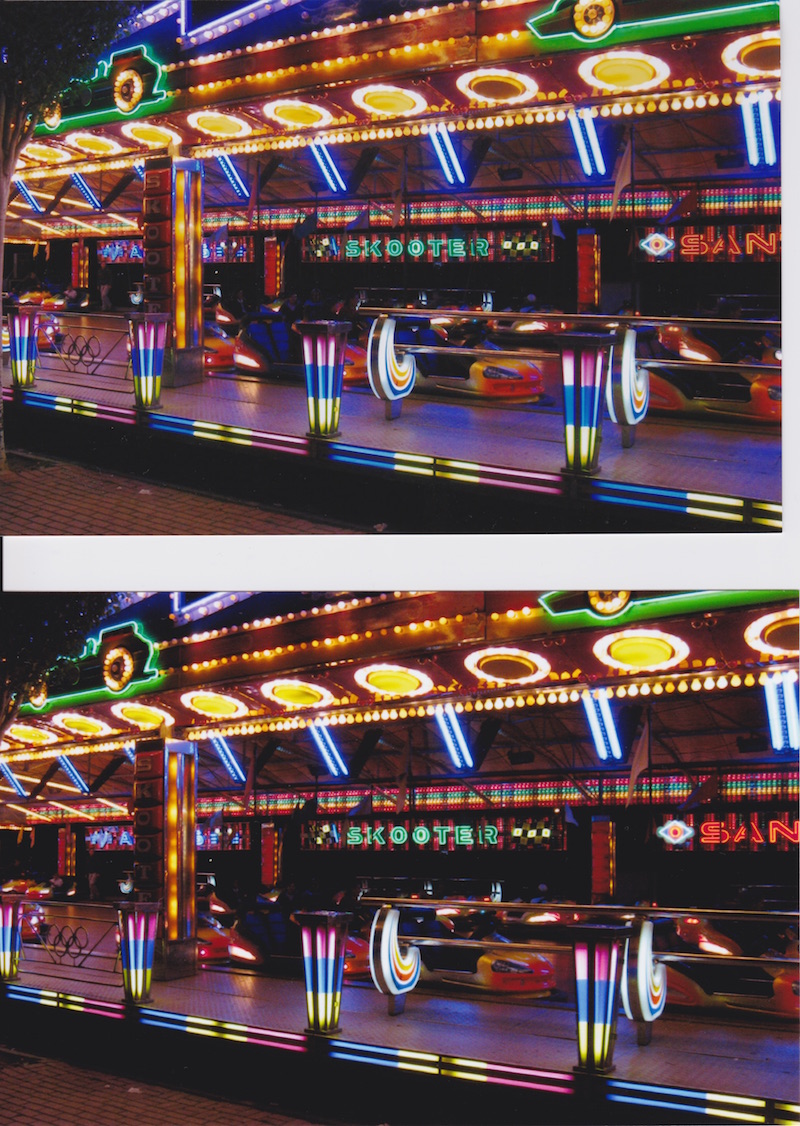 One of these is a print from the lab that Apple uses, the other was printed using the MG7550. Can you tell which is which?

The top one is the one from the lab. If you look carefully, you'll see that the blacks aren't as dark and the colors aren't quite as saturated. However, the bottom one has more of the image cropped off. The printer has no problem printing borderless, but it only has a limited number of size presets, so for 15x10 cm photo paper you have to use the 6x4 inch setting, but that's actually 15.24x10.16 cm, so the paper is 1.5% smaller than what the printer thinks.

The image above is a scan at 600 DPI (24 pixels per mm) of the two photos. If we zoom in to 200% on the two photos, it becomes clear that the lab photo is sharper and has smoother colors than the home-printed photo.

Printed on the Canon PIXMA MG7550

The original JPEG from the camera

However, this is a very small detail enlarged about 12x. I can't tell sharpness/smoothness difference with the naked eye. The lab and the printer both have strong and weak points, so I'm declaring it a tie. However, the strong points of the printer are much easier to observe.

Also note that I used HP Premium Plus photo paper, but I told the printer it's Canon Photo Paper Plus Glossy Ⅱ. The printer comes with three sheets of Glossy Ⅱ paper, and prints on that are actually even more contrasty. When selecting the "other photo paper" setting with the HP photo paper, the result is markedly less contrasty and yellower. You'll get the most accurate results by creating a color profile for the printer/ink/paper combination you intend to use.

So the results are pretty similar. But the prices aren't. Photo paper gets expensive fast: the Canon paper costs 8 euros for 20 sheets at a local store, that's 40 cents per sheet! Even online you pay about 18 cents per sheet. HP is a bit cheaper and there are also no-name variants that get below 10 cents per sheet. Don't forget you also need to buy ink, which will also be several cents per photo.

Ordering photos from a lab is much, much cheaper. From Apple through iPhoto, you pay 12 cents per photo at 15x10 cm. However, there's an additional € 4.83 per order shipping costs. So you need to order at least three dozen photos to reach a per-photo cost of 25 cents. This is similar for other services.

So if you can avoid paying inflated prices for your photo paper, printing at home makes sense if you value being able to print a few photos here and there rather than ordering relatively large numbers at once. Also, there's the instant gratification angle. Having to wait several days or even a week to see your prints sucks, especially compared to printing wirelessly from your iPhone in 20 seconds.